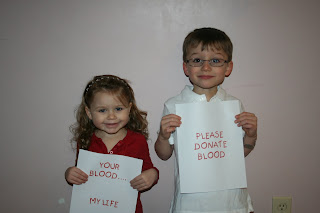 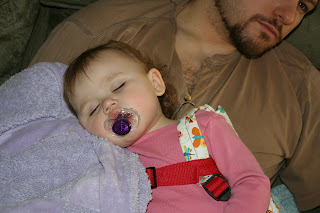 I remember vividly the drive into Children's Hospital. It was the longest drive of my life. Thoughts were racing through my head, my stomach was twisted and tied up in knots.....I felt like the world was spinning viciously around me - I was terrified.

It was just after 9 a.m. when we finally reached the hospital. We pulled Sasha (17 months at the time) out of her carseat and put her into the stroller. She was in such a great mood - smiling and giggling......despite her feeling under the weather battling another infection.

I had this heaviness in my heart for I knew that this was a day that would change Sasha's life forever.
Little did I know what it would really mean......

Sasha had her first infusion of Gammaglobulin (blood product) for her immune deficiency 2 years ago today....
The first infusion was not fun - but not horrible either....the worst part was actually the blood draw beforehand to get her baseline levels (kidney, liver functions as well as her basic lab work)....it took 20 minutes to find a vein. My heart was breaking as she pleaded for them to stop. At that moment, I wanted to wrap her in my arms and take her away from the nightmare of a day she was having.....but I knew this was best for her (well, I was hoping it was). I had never been so torn in my life. I knew this was the 'right' thing to do, but as a mother - watching her cry and plead - well, it felt SO wrong......

The actual infusion went rather well once it was started...the nervous nurses were terrified to do her infusion as she was the youngest (at the time) child who they had done sub-cutaneous Ig on...all the other little ones received their infusions via IVIG...(today, I bet they do this on young ones all the time!)

After the day was done - we gave her a big 'prize' for being a 'brave' girl and took her home to rest.

The weeks that followed were not fun - week after week the infusions brought many side effects and doubts on my end....the poor immunologist got an email almost weekly from me asking if we had done the right thing. He was so kind and understanding and continued to reassure me that some children just take time to adjust to the product and to give it a 'good 4-6 months' before we called it quits.

2 months later Sasha developed a serious kidney infection that left her extremely ill over Easter. The first day or two in the hospital were very scary as we thought we could lose her. Besides the first 2 months of her life (which were touch and go) - we had never seen her so ill.
Ralph and I truly feel that Sasha's saving grace was being on the infusions....had it not been for them, we don't know what would have happened.

It took time for her to get used to the infusions, but she eventually did. To see how far she's come in the past 2 years totally amazes me. What she (and children like her) has had to endure is more than any child should have to endure in a lifetime - nevermind 3 1/2 short years.

This Wednesday she had her infusion and she stood there as brave as could be - she didn't cry, she didn't fight it, she didn't flinch when either of the needles went in. She put her backpack on - we put her pump in - and she played for 2 hours. The end of the infusion was hard for her (some are harder than others) and she ended up going to bed early because she was tired and had a headache - but she was a trooper through it all....as always.

When I think of how dramatically her health has changed since February 6th 2007 - my heart soars. These weekly infusions allow her to LIVE life instead of just 'existing' between illnesses.

Every time Sasha (and her brother Will) have their weekly infusions, I think about the thousands out there who gave something of themselves so that my children could experience life without the fear and limitations.....my gratefulness cannot be measured in words.....how can you thank someone for giving your children the gift of life???? Words could never be enough.

Tomorrow we will hold a blood drive in honor of ALL the children of Team Hope.....6 children total - including her brother. ALL of these children receive these weekly infusions and benefit from the Gift of Live that blood donors give when they donate blood.....To me, it will be an 'extra' special day - a day that reminds me of WHAT drove me to getting out there and making a difference.....sharing our lives, our story, our joy, and our HOPE.

Without blood donors, our children could NEVER 'LIVE' life the way children should.....it would be illness after illness.....

Today, I look ahead with GREAT HOPE because I KNOW that Sasha (and Will...and others like them who receive these life-saving infusions) has a CHANCE to experience the JOY of LIVING!

If you are able to donate blood - please consider giving the gift of life....whether it be tomorrow in Billerica at our drive - - - or another day in the future.

Even if you're not local - please consider finding a blood drive in your area.

Remember....it only takes ONE person to change ONE life....BE THE ONE.

Blessings
Stefani
Posted by Hope Rising at 8:29 AM