A long week - but FINALLY things are in order! 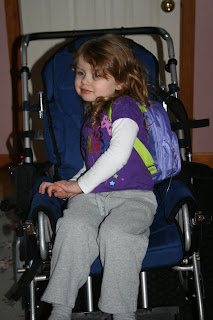 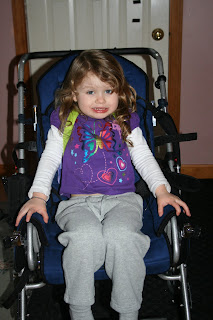 On Monday we received a call from Dr. Shoffner's office saying that the fresh muscle biopsy and pathology referrals weren't in the BCBS (ins. co) system and they thought they'd have to reschedule the whole trip. I tried calling Blue Cross (BCBS)and they were CLOSED due to a stinkin snow storm - I was pretty worried that we weren't going to be able to go. I spent ALL of Tuesday on the phone between the PCP's office, Atlanta, our metabolic doc, and her case manager at BCBS trying to sort it out. It was looking less and less like we were going to be able to go to Atlanta. I think I cried more on Tuesday than I have in 3 years. I was so frustrated and I felt like I had let Sasha down when she really needed me most. I was devastated....and VERY angry that the insurance company was holding it up. We finally got word that they would approve the procedure and pathology - but the reviewing doc at BCBS said she was going to 'revoke' Dr. Shoffner's visit because Sasha can see 'neurogeneticists' up here - they won't pay for him if she can see someone up here. I totally freaked - because, to me, it showed that they weren't looking at the referral OR her case (she's been seeing a neurogeneticist for a year and a metabolics doc for 9 or so months and THEY are the ones referring her out to Dr. Shoffner). I called the case manager at BCBS and just lost it - I told her how NO doc wanted to touch Sasha with a 10 foot pole with all her diagnosises and the ones who WERE working with us were at a point where they couldn't do much more for her without Dr. Shoffner piecing this altogether. She reassured me and told me that she would do her best to fix this for us. I called several times that afternoon to see if the 'verbal' approval had 'hit' the system (so we could make the biopsy appointment) and also to see if they pulled the referral for Dr. Shoffner. Nothing......just the same as it was before....2 visits to see JUST Dr. Shoffner. I was beginning to get worried...time was running out.
Sasha's wheelchair arriving was the ONLY bright spot in that day. It fits her just right, she loves it and it doesn't have that 'wheelchair' look - it looks like a glorified stroller...which is exactly why we wanted this particular type (for those who are wondering - Sasha does not need this wheelchair on her 'good' days - these are times when she can run, jump, play and BE a normal child - - - on her BAD days - she struggles with simple things and has limited energy, and sometimes overexertion causes some pretty 'not fun' stuff to happen to her - so this will just help alleviate all of this and give her the ability to do all the stuff she wants to do without having to worry about limitations!).

So...Tuesday was a sleepless night for sure....
I called Wednesday morning twice to see if it 'hit' the system yet. On the second phone call, the rep I was speaking with told me that the review department told me to call back THURSDAY and it should be all set. I totally went bonkers and said that we didn't have an extra day...I told her that I was NOT getting off the phone and that THEY would push the written approval through NOW as we've been waiting for something since the 23rd and our appointment was in jeopardy. I went on to say (in a VERY loud and stern voice) that my husband would lose a week's pay (due to FMLA) and my kids have been out of school all week to keep them from getting ill AND our travel arrangements were also at risk...so anything other than an approval pushed through immediately would NOT be acceptable. The poor woman put me on hold and came back about 5 minutes later - and she put the clinical reviewer on - and TA-DAH! the referral JUST went through! THEN I spent ALL day waiting to see if the surgeon still had a slot for Sasha - which, they did!
SO....after countless tears and MUCH stress and frustration - I received a call around 4ish last night saying that we were ALL SET to go to Atlanta!!!

All in all I spent about 9 1/2 hours on the phone back and forth with everyone in the past 3 days - Of course, I truly thought we weren't going so I hadn't packed a darn thing! EEK!

Today I am going to start packing - but I have a million things to do - let alone meet with Sen. Fargo and 2 state reps in Boston with the kids to talk about legislative efforts for Mitochondrial Disease (talk about CRAZY huh!?!?).

After some deliberation, we decided to stay at our friends house on the way home (instead of staying there on our way down) - just to avoid any extra exposure to illness on the way down - so we're likely going to leave Saturday instead of Friday - which is good because it gives us more time to pack and get ready AND we won't be driving in CRAZY rush hour traffic...phew.

I'm not feeling fantastic today and haven't decided if I am getting sick (OH NO) or if it's from all the stress of the past 3 days.

I want to thank you all for your encouragement and hugs along the way...I am HOPEFUL that Dr. Shoffner will give us GOOD news and tell us that he doesn't think it's Mitochondrial Disease....but we are prepared for anything that he has to say. PRAYING for the best!
We will update frequently while on the road and be uploading pictures to our blog (which will be updated more frequently than this with pics and little stories) - if you want to follow along there - http://hoperisingup.blogspot.com/
Please pray for safe travels, good health, a good appointment and a smoothe fresh muscle biopsy and recovery for Sasha.
Blessings!
Stefani and Ralph