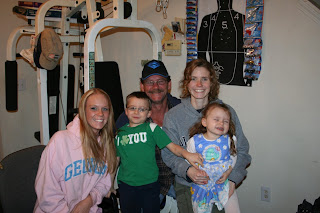 Well - we're currently driving through North Carolina. Our plan is to stop in Raleigh and stay until Monday morning. It's still too soon for Sasha to take the long trip home - she's been really crabby and crying a lot - so we figure we'll give her an extra day or so to continue to heal.

Wednesday she fell asleep for a bit - and when she woke up she was just beside herself with pain - her head was bothering her (no lights, no sounds and didn't want to eat)and she said her leg was hurting (which we expected) really bad. As the night went on, she was rolling around on the bed with me complaining of her head, her belly, and her leg...I felt SO bad for her - and there was nothing more to do besides keep the tylenol w/codeine in her - some food to buffer the medicine, and rub her back, head, and belly...it was a LONG night. I couldn't help but cry for her....it was the worst feeling in the world to not be able to help her. She kept rubbing my face with her hands and telling me she loved me and asking me to make her feel better...it was so SAD!

The next morning she woke up and was moving around a little better. She wasn't feeling great still, but there was improvement. I was all prepared for this day - I had brought a lot of nailpolishes and play makeup and hair accessories to pamper her for the day - and had bought special toys JUST for this day - to help it move along. She was VERY happy to be pampered and she was SO excited to be a "Rainbow Princess." As the day went on she was taking more independent steps - and finally daddy got her moving around by doing some 'low key' dancing with her.
She was SO proud of herself and was SO determined to 'DO' things by herself.
We took her out for a stroll in the 'stroller' and she LOVED that she could enjoy the outside WHILE drawing (gotta love the tray feature!).
The kids were going stir crazy - so we popped them in the car and got daddy a coffee.
We had dinner and she asked for ice cream - since she handled the ride to D&D's so well - we figured she could do another mini-trip to get some ice cream. She did really well until we washed our hands after she went to the bathroom. I'm not sure how - but she got her bad leg squished up against something and totally lost it (I would too) - so that ended her ice cream excursion - I took her out to the car to calm her down (and she did eventually calm down) and then we headed home. She slept MUCH better Thursday night and woke up Friday feeling better than she did the night before.
We decided to give Sasha another day before we headed out for a long drive and we went into Atlanta to the Aquarium. We met up with a friend of mine and spent the morning at the Aquarium. It was nice - but VERY crowded - and since Sasha really couldn't do any walking - she sat in her chair and was pushed around most of the morning - it was frustrating because we couldn't get the chair in to the tight spots and there weren't many 'openings' in the front of the exhibits (so she could actually see what they were) becuase there were SO many people there (apparently Fridays are 'field trip' days...sigh). Anyway...she still had fun...and so did we...but it was nearing 'time to go' at noonish and she was getting really cranky and her medicine was starting to wear off. We decided to go to the Shake n Bake (sorta like a Friendly's up here) where the food was cheaper.
We did pretty good - she got her medicine in her and she did well until it was time to go - and we knew we had reached her limit - so we went our separate ways - it was SO nice to visit with my friend and her children though (the kids liked it too).
We decided we'd head to North Carolina in the a.m. so we came home and packed up our stuff Friday afternoon. We went out for a quick dinner Friday night (which went well!) and headed to bed.
Sasha was up at 5 a.m. - all out of sorts - thinking that it was time to get up....then she and Will rolled around on their areobeds like crazy until 7:30 - neither Ralph nor I got any sleep between 5 and 7:30!
We got up - I packed up the room and Ralph fed them....I got the showers running (Sasha's first one since the surgery) and Ralph packed the car while I got them ready. Ralph showered and we were on the road by 10:45 a.m.
It was a sad goodbye to my cousin because I knew it'd be a while before we'd see each other again....but we were SO grateful that he opened his home up to us - and that his daughter spent the week helping us out and making things SO much easier on us....what a blessing it was (in more ways than one).
The ride so far has been kinda rough for Sasha (Will's been AWESOME!) - she's just NOT really up for a long ride yet...so we'll likely be staying more than one night in Raleigh. We just passed signs for Chapel Hill, NC - about 60 miles out from our destination....
Here are some links to some albums we have up on facebook - each album is a different part of our trip (that's why there are so many)....
Feel free to check them out...
http://www.facebook.com/album.php?aid=17346&id=1036926732&l=2ea70
http://www.facebook.com/album.php?aid=17865&id=1036926732&l=3b628
http://www.facebook.com/album.php?aid=17860&id=1036926732&l=4054e
http://www.facebook.com/album.php?aid=17637&id=1036926732&l=d8b0c
http://www.facebook.com/album.php?aid=17662&id=1036926732&l=b7d6c
http://www.facebook.com/album.php?aid=17850&id=1036926732&l=75154
http://www.facebook.com/album.php?aid=17851&id=1036926732&l=b2249
http://www.facebook.com/album.php?aid=17854&id=1036926732&l=43f07
Thanks so much for your continued support, your love, and prayers during all of this....you all are an amazing source of strength and we are SO blessed to have you all in our lives....
Much love,
Stefani and Ralph
Posted by Hope Rising at 5:07 PM