Sasha's in surgery as I type this.... 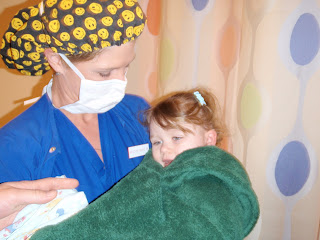 We got up REALLY early this morning - Sasha showered and she got to put on a new 'dress' (which was really a nightie!) and she was ALL excited about that. Our trip into Atlanta was uneventful and we got to the surgery center at 6:30. The place was beautiful inside and the staff has been wonderful so far.
We met with the nursing staff, the surgeon, and the anesthesiologist - we discussed the procedure and the possible complications.
The piece of muscle that they will be taking is MUCH larger than we anticipated but he told us she would be back to full speed once she fully healed.
The lumbar puncture might pose some issues since they are taking 2 teaspoons of CSF fluid (her other LP's were MUCH less fluid) - he told us that it is 'possible' but not likely that, if problems arise that she might need to be admitted for IV fluids and IV Caffiene. The LEAST likely scenario is that they would need to do a 'blood patch' - which they take blood from her vein and insert it in the spinal column where they did the LP - and it's REALLY not likely that it would happen.

We'll be hearing from the doctor soon as he said it's about a 45 minute procedure and it's been over 45 mintues. She'll be in post-op for at least a half hour and then recovery for at least 2 hours...so it'll be a while before I update....